The Race Across the Pond

Ireland Through the Ages - The Race Across the Pond

The North Atlantic has some of the worst, most unpredictable weather in the world. The biggest obstacle facing the airlines wanting to fly commercially over the lucrative routes between the United States and Europe was the vehicle. How could one aircraft carry passengers, freight, and enough fuel to fly over 2,000 miles in such terrible conditions? 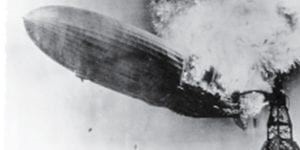 It was generally agreed in 1924 that the aeroplane would never be a suitable vehicle for carrying passengers across the Atlantic Ocean, and that airships would operate all the long-distance routes of the future. In the summer of 1936, Germany began the first commercially viable service across the Atlantic using airships. These lighter-than-air balloons, filled with highly flammable hydrogen gas, were the slow-moving luxury liners of the sky.

On 6 May 1937, a now-famous German airship called The Hindenberg caught fire while mooring in New Jersey. The airship was completely destroyed and 36 people died. The whole disaster was recorded in vivid detail by a Pathenews film cameraman and reporter. The newsreel was shown in cinemas around the world, and it remains a well-known image to this day. The Graf Zeppelin was immediately withdrawn from service and there were no more airships crossing the Atlantic. 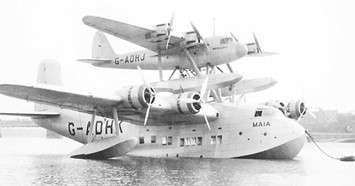 Landplanes were inappropriate, as they were heavy and required hard runways, and there were very few of them before World War II. On the other hand, flying boats had many advantages. Primarily, there were always landing places for even the heaviest ones, and almost all the great cities of the world were near the sea or large waterways, even while few had suitable runways.

However, there were some problems with flying boats. They needed large amounts of fuel just to get off the water, yet once airborne they needed only a relatively small amount to maintain a cruising speed. How do you get the aircraft into the air without using too much fuel?

There were three initial answers to this question:

Catapults: These would simply fling a seaplane from the deck of a depot ship using a compressed air catapult. Though this was successfully attempted in 1937, it could never be used for passenger traffic because of the high gravity forces.

The Mayo Composite: This involved carrying one aircraft on the back of another, piggyback style. On 20 July 1938, the Short-Mayo Composite (designed by Major R.M. Mayo of Imperial Airways) took off from Foynes. The mother aircraft, Maia, carried the smaller Mercury well out to sea before they separated. After separation, the Mercury flew to Montreal and the Maia returned to Foynes. But this was too dangerous and alarming to do with passengers, and, as with in-flight refueling (see below), only mail could be carried. In 1939, the British Air ministry rejected the project. 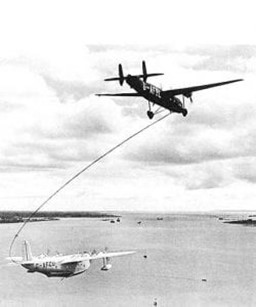 In-Flight Refueling: An aircraft that took off under its own power used a lot of fuel to get airborne. So, if it refuels after takeoff, it can fly much further. The only way to refuel in the air is from a flying petrol tanker, which is what British Imperial Airways tried in 1939. Two flying boats—Cabot and Caribou—made eight round trips from Foynes to Newfoundland. They were refueled in the air by a converted Harrow bomber taking off from a grass runway at Rineanna (now Shannon Airport). The tanker shot a cable to the flying boat with a rocket-propelled harpoon. This was attached to a hose that was locked into the flying boat’s fuel tank. As the tanker flew above the flying boat, the fuel flowed with gravity.

In the end, in July 1936, Pan American Airways signed a contract with Boeing for the first practical transatlantic passenger aircraft—the B314 flying boat.

You can visit the Foynes Flying Boat museum on Day 7 of our tours to the South West, West or Grand Tour of Ireland.